In case you missed the announcement in my newsletter, I just wanted to let you know that the fifth story in the Stonefire Dragons series, Reawakening the Dragon, is now available! While not in the 3D image of a boxed set, it is the complete story. In fact, all of the boxed sets in the Stonefire Dragons have been reformatted into novels with new covers. My hope is that it will make the series reading order easier to understand. 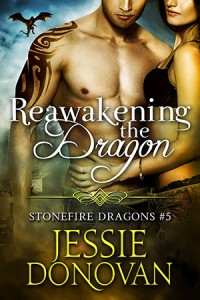 Tired of reporting the news but never investigating, Jane Hartley is determined to expose the truth of the Carlisle dragon hunters. While meeting with one of her sources, she spots the tall, blond dragonman she first saw three months ago back on Stonefire. When the dragonman warns her off, Jane becomes more determined than ever to find the truth before he does.

With most of the threats to his clan under control, Kai Sutherland wants to find a way to take down the Carlisle hunters for good. In the beginning of his investigation, he sees the human female his dragon wants. Putting aside his own needs, he tries to scare her away to focus on the hunters, but the female refuses to go.

As they work together to discover the hunters' secrets, the attraction between them threatens the investigation. Kai never expected to find his second chance, yet as the danger amps up, can he find a way to have her while still protecting his clan?