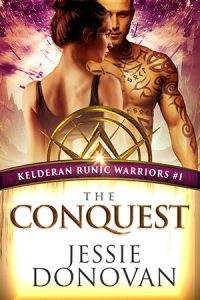 A human female leader of a low-tech colony with a shortage of men and a ruse to trap male aliens. A Kelderan warrior prince on a mission to find a new planet to colonize, even one that might be cursed. When they clash, sparks fly in more ways than one. Grab your copy today at your vendor of choice:

**Barnes and Noble, and The Book Depository coming!**

The audiobook will be out later in 2017.

SYNOPSIS:
Leader of a human colony planet, Taryn Demara has much more on her plate than maintaining peace or ensuring her people have enough to eat. Due to a virus that affects male embryos in the womb, there is a shortage of men. For decades, her people have enticed ships to their planet and tricked the men into staying. However, a ship hasn’t been spotted in eight years. So when the blip finally shows on the radar, Taryn is determined to conquer the newcomers at any cost to ensure her people’s survival.