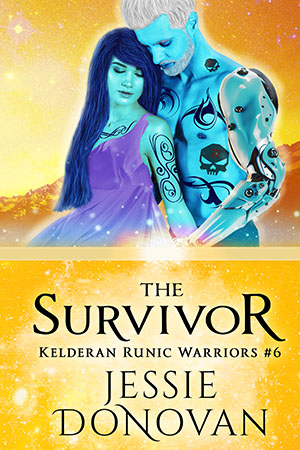 About a year ago, Davrel Kolari was captured by a cruel pirate gang called the Rovers. They cut off his arm, turned him into one of their slaves, and made his life hell. Only because he learns how the Rovers want to assassinate the entire Kelderan royal family—including the female he intended to marry—does he fight to live and find a way to escape. His plan is to warn his old trainer and former general of the danger, extract a promise from them to protect his ex-love, and then let them do what they will with him.

Kajala Mayven has adjusted to being a single mother and living on a distant planet. With her son as her top priority, she cements some plans for her future and does her best to make them a reality. But then her former lover and father of her child suddenly reappears out of nowhere, a shadow of the male he once was, adamant about pushing her away. However, Kajala isn’t about to give up so easily and is determined to help him heal for the sake of her son.

As the pair learn about how they've each changed, they both realize that maybe they fit together better now than before. However, unless they can destroy the pirate gang looking for Davrel, they’ll never have a happy future. Will they find a way to destroy the Rovers? Or, will Davrel have to give up everything again to protect his female and baby son?