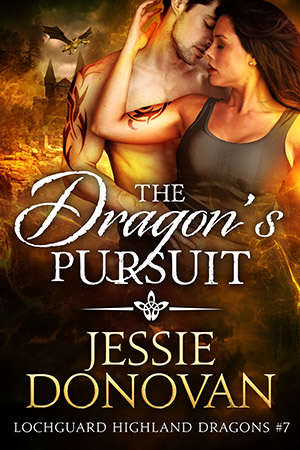 When Dr. Layla MacFie realizes someone is stealing much-needed medical supplies, she doesn't know who to trust inside her surgery. Determined to find the culprit herself, she reaches out to Lochguard's electrician, Chase, who just happens to be the younger male who's been trying to woo her for months. But since there's no one else to help install the security cameras, she can't avoid him any longer and ends up being alone with him far more than she wants. If only the life of a dragon-shifter doctor wasn't so complicated, she would be tempted to give in and sleep with the male.

Chase McFarland has known for the last two years, ever since the day after his twentieth birthday, that Layla is his true mate. While he tried to resist his dragon's badgering, it didn't take long for Chase to realize how amazing Layla is and that he wants to take care of and claim her for himself. His initial attempts to win her all fail, but when she asks for his help with a secret project, he decides to change tactics and prove he's a worthy male. The more time they spend together, the more Layla gives in, until he's ready to tell her the truth and face the consequences.

As the pair dance around each other and discover each other’s secrets, they find out who the thief is and must decide what to do. Will Chase finally be able to prove he's mature enough for the much older Layla, or will she forever be chained to her work and deny what both she and her dragon crave?