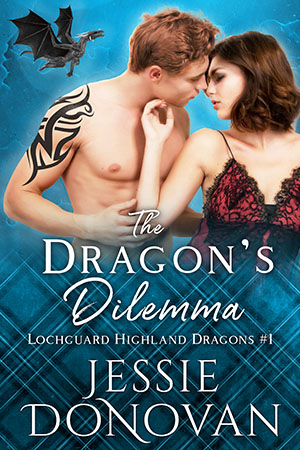 From the author of the USA Today bestselling Stonefire Dragons series comes a new series centering on the dragon-shifters of the Scottish Highlands. Full of humor, alpha personalities, and a new threat, Clan Lochguard is waiting for you…

In order to pay for her father’s life-saving cancer treatment, Holly Anderson offers herself up as a sacrifice and sells the vial of dragon’s blood. In return, she will try to bear a Scottish dragon-shifter a child. While the dragonman assigned to her is kind, Holly can’t stop looking at his twin brother. It’s going to take everything she has to sleep with her assigned dragonman. If she breaks the sacrifice contract and follows her heart, she’ll go to jail and not be able to take care of her father.

Even though he’s not ready to settle down, Fraser MacKenzie supports his twin brother’s choice to take a female sacrifice to help repopulate the clan. Yet as Fraser gets to know the lass, his dragon starts demanding something he can’t have—his brother’s sacrifice.

Holly and Fraser fight the pull between them, but one nearly stolen kiss will change everything. Will they risk breaking the law and betraying Fraser’s twin? Or, will they find a way out of the sacrifice contract and live their own happily ever after?