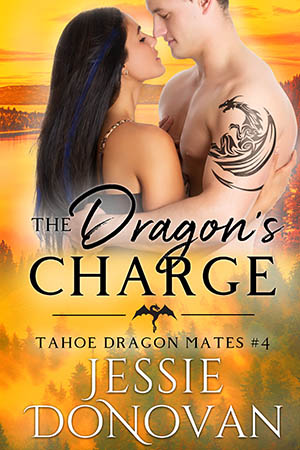 Brad Harper has known that the human bar owner, Natasha Jenkins, is his true mate since he first met her by chance on a night out with friends. However, after his first mate ran off with a human, he’s held a grudge. He only took the job in the bar as a favor to his clan leader. But when both Natasha’s bar and her life are in jeopardy, he has no choice but to protect her. The only question is if he can resist her.

Natasha Jenkins likes setting goals and achieving them. It’s how she was able to set up a successful bar in Reno and be her own boss. However, when some troublemakers show up and soon start harassing her clientele, hoping to put her out of business, she struggles with what to do. Then there’s a threat to her life and she finds herself swept into the unknown world of dragon-shifters. One dragonman in particular seems to both hate her and want to protect her at any cost.

When Natasha has no choice to but to accept a fake marriage, she soon learns more about the dragonman who used to work for her. And just when she thinks maybe she can craft a new life plan, trouble shows up again. Except this time, it could destroy everything she holds dear once and for all.