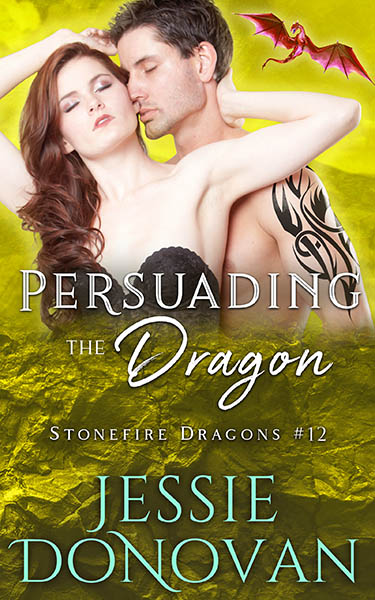 Nearly a year ago, an injured human female showed up on Stonefire’s land carrying a flash drive full of information stolen from the Dragon Knights. However, before Zain Kinsella could interrogate her, she fell into a coma and hasn’t awoken since. After his initial anger fades, he wonders if the thin, pale girl will ever wake again. When she does, it’s up to him to help guard her and make her strong enough to face some questioning. He most definitely shouldn’t notice her delicious heat or the sadness in her eyes. She’s a prisoner and can be nothing more.

Ivy Passmore finds herself inside a dragon-shifter hospital, bedridden and barely able to sit up. Despite the overwhelming grief at the death of her brother, she’s determined to do everything she can to atone for her part in helping the Dragon Knights and causing her brother’s murder. She’s more than ready to tell the dragons everything. When one tall, quiet Protector makes a deal—she endures his physical therapy, and he’ll help track down her brother’s killers—Ivy has no choice but to agree. Slowly, her idea of dragon-shifters changes, especially around one certain dragonman.

As two former enemies morph into something more, the Dragon Knights find out about Ivy's location and offer a reward for her death or capture. Will Stonefire be forced to give her up to protect their clan? Or, will Zain and Ivy be able to find a path where they can defeat the Knights and be together?